The Birth of A Hero, a leader, a Man

“A life is not important except in the impact it has on other lives.”

“How you played in yesterday’s game is all that counts.”

Jack Roosevelt Robinson, A Man Who Over Came the Odds

Being heroic does not mean to be a hero, but to act on behalf of those you care for. Jackie Robinson was one of the most heroic leaders of his time. Standing against all odds he did what know African American could have ever dreamed of during the early 1940s. With determination, passion, and an understanding of his true self Jackie Robinson was able to become one of the greatest leaders both on and off the diamond. Jackie used his tremendous attributes to thrive as one of the most influential civil rights activist as well as one of the greatest baseball players to ever step onto home plate. Jackie led by examples by fighting through all of his hardships and obstacles. Jackie persevered into greatness day in and day out, enabling him to be in my opinion one of the greatest leaders of all time.

A young, yet bold achievement

Before making his name on the Diamond as a Brooklyn Dodger, Jackie achieved his stripes in the military. Jackie was an outstanding athlete throughout his whole life. He was the first student to ever hold 4 varsity letters in collegiate sports, those sports being football, basketball, baseball and lastly track. Jackie set such a milestone in ULCA’s athletic hall of fame that they later ended up naming the new baseball stadium ” Jackie Robinson Stadium.” After only two years due to family matters Jackie was forced to leave school. He was then a few months later drafted into the war and sent to a segregated Army Calvary.  During Jackie’s service was were his first fight of civil rights arose. While waiting the results of an injured ankle Jackie boarded a military personal bus to be driven back to camp. Despite the military’s personal “unsegregated” busses, a white driver told Jackie to move to the back. Jackie refused which resulted in his arrest of military police and his completion in the military after a long trial virtually ending in an honorable discharge. 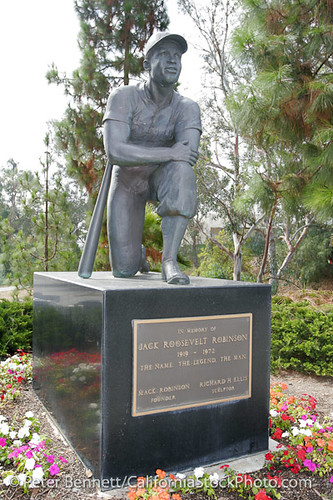 His style of leading

One man who Jackie resembled a very similar leadership style to was Gandhi. Between the both of them critical reflection was a key leadership style. For Jackie reflecting critically on himself was the only means to keep him on the straight and very narrow road to success. Jackie basically stood in the middle of a war between blacks and whites, and Jackie was mediating between both sides. With support and pressure from the blacks and hatred and aggression from the whites, Jackie took it upon himself to reflect upon who he was as a person and use it to lead by example. This making him one of the greatest leaders in sports history.

Jackie’s journey was not one that most athletes can normally endure. Jackie new from the very beginning that he was in it for the long haul. Starting Jackie’s baseball career he began with homeruns out of the Bruins Field. Then next it was onto an all black league, from there minor league, and eventually his shot at the big leagues. In 1947 Jackie Robinson stepped onto that Diamond with the that Brooklyn Dodgers jersey and broke the color barrier. Although Jackie had the entire support of the black community in his batting cage he was still faced with harsh and uncurl environments. At the start of his career, baseball franchises refused to allow an African American enter their field. While on is own turf he was spit on and had food thrown at him as if he was an animal.  Through all of the adversity and hardship Jackie managed to hold himself together to fight through the metaphorical and physical barrier between whites and blacks, thus producing one of the most historical moments in athletic history.

From civil rights to center field

After baseball, Jackie got a job as vice president of a coffee shop chain called Chock Full O’ Nuts. In 1957, Jackie joined the National Association for the Advancement of Colored People (NAACP) and became the chairman of the Freedom Fund drive. In a speech to NAACP members he said, “Certainly if such revolutionary change can be brought about in baseball, it can also be brought about in education, in transportation, and any other area of our American life.” Jackie used his strong connections from the pros, as well as his followers through baseball to help raise large amounts of money as well as awareness for civil rights. Though he was not a direct activist acting in sit-ins or other means he was more so a spokes person and speaker on behalf of the organization.

The aggression of an athlete

Though Jackie was known for his outstanding performance on the field not many understood the real aggression within him. For example the movie “42” which is a modern day story portraying Jackie’s life. This aggression and rash thinking proved to be at times a very critical lapse in his leadership. Jackie was bombarded with hatred and separation on a daily basis so obviously anger was a natural response. Yet Jackie at first did not know how to cope with this anger. One scene from the movie showed Jackie and his home with his wife while awaiting the next day of practice. One of the managers came to his door and told him he had to leave due to the fact that a mob of white men were on their way to hurt Jackie and his family. So out of anger and spite Jackie was refusing to leave, as he wanted to stay and fight them all. Against his judgment he was removed from his home and taken to another house away from harm. Its moments like this that left Jackie very vulnerable. He let his dignity and aggression get in the way of his goals and if it was not settled it could prove to be very detrimental.

An MVP in every aspect 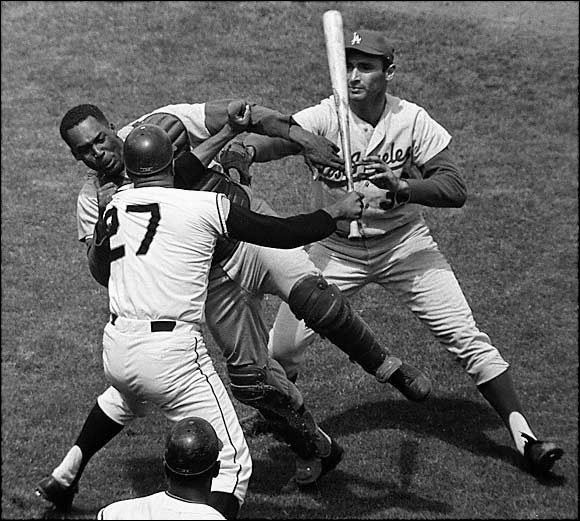 Before accomplishing the diamond in the MLB, one of Jackie’s greatest accomplishments was one a little more personal. Jackie displayed perseverance and self-control in the face of hatred from fans and opposing players. He showed no anger in public, he betrayed no self-pity. He went out every day and swung his bat, ran the bases and fielded his position, he became the man that he knew he had too be, and the man that no other player on those fields were.

Jackie Robinson; From new to old

Settling down in the Hall of Fame

“A life is not important except in the impact it has on other lives.”

This quote said by Jackie Robinson is what I believe to be one of his most powerful quotes. The reason being is because of the significance that it holds in just 14 words. What I believe Jackie is trying to say is something along the lines of being the bigger man. It is an idea that proposes every man or women to life live as if it is not for themselves but yet for someone else. By doing this it enables a huge web of individuals who are living to solely help and impact others in a positive and reflective way. This is such an amazing idea because it eliminates doubt for self neglect or self wrongness. Jackie is such a great example of his own quote. He worked through all of his obstacles and road blocks not for himself, not for the glory or spot light of the MLB but for every individual who wore his number. Jacob Butkus, born in Edison NJ, July 9th 1996. Currently 18 years old attending Wagner College. Is a colligate player for the Wagner college football team. As well Jake enjoys spending time with his friends and family. Jake plans to major in Business management and marketing. Lastly the reason Jake admires Jackie Robinson so much is due to his personal attributes. Jackie shares similar attributes that Jake does as well. Those attributes being hard working, dedicated, and a sense of self drive.